Jhansi has played a major role in the history of India which is clearly reflected by the historical points and places in the city. The forts, monuments, parks and museums reflect the various facets of Indian history. Some of the points of interest within and in the outlying towns of Jhansi are as follows: 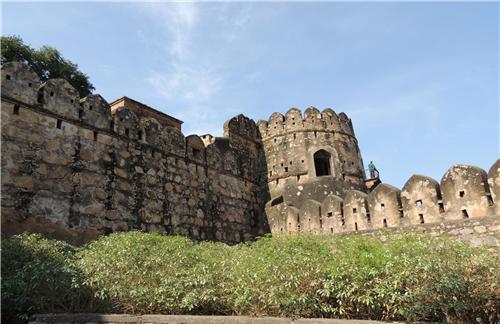 Jhansi Fort was built during the rule of Bundela king Bir Singh Ju Deo in 1613 and was later extended during the time of Naroshankar in the 18th century. The site map placed at the entrance of the Fort outlines the main points of visit within its premises which include the two royal temples Ganesha and Shiva Temple, Canons, Kadak Bijli and Bhawani Shankar, Panch Mahal, the execution tower, Jumping spot, etc.

The Light and Sound Show held in the evening is of tourist interest too. Timings for the Show: every evening at 6.30 during winters and 7.30 during summers.
Jhansi Fort Location: It is located in Old Jhansi Town, near Jhokan Bagh.

This cenotaph was built by Rani Lakshmi Bai in solemn memory of her husband Raja Gangadhar Rao in 1853, the year of his annihilation. The finely engraved dome mounted on ten pillars is an architectural marvel of Jhansi.
Location: Close to the Lashmi Tal and Narayan Bagh in Old Jhansi Town.

This was one of the residences of Rani Lakshmi Bai which presently is converted into a museum. Among the six main rooms, corridors and innumerable small rooms, the beautifully decorated Durbar Hall is well preserved even today. The museum on the lower floor has sculptures and art pieces belonging to the 8th century AD collected from various towns in Bundelkhand.

Government Museum in Jhansi houses various objects, paintings and sculptures belonging to various stages of history right from the time of Pratiharas to the Bundelas and then the British period. The Sound show on the first floor of the museum will help you interpret and know better of what is displayed here.

The Government Museum is located close to Jhokan Bagh near the Cantonment area of Jhansi.

This temple is one of the oldest in the city built during the Bundela rule in the 18th century that holds architectural importance as well. It is located close to Lakshmi Tal and Lakshmi Darwaza. Visitors throng to Mahalakshmi Temple during special times and occasions such as Lakshmi Puja during Diwali, Navaratri, etc.


Jhokan Park houses the memorials of the British soldiers who were massacred during the revolt that took place in 1857. This park is under the care of Architectural Society of India and hence any new development near this area is forbidden by the rules.


St. Jude's Shrine is run by the Jhansi Diocese and holds special importance for the fact that the bone of St. Jude is buried under this cathedral. Tourists visit Jhansi during October when the St. Jude's feast is held.


Orchha is an outlying town of Jhansi located 15 kms from main town. It is popular for its Bundela-style architecture, the remarkable chattris, palace turned temples belonging to the 17th century and stone carved monuments and palaces belonging to the Bundela times. Some of the places of interest here at Orchha are Deenmaan Palace, Mahalakshmi temple, Chatthurbhuj temple, Rai Praveen Mahal, Jehangir Mahal etc.

How to Reach
Orchha is located 15 kms from Jhansi. Buses, tempos, rickshaws and taxis are best suited for your travel to Orchha.


Barua Sagar Tal is located 24 kilometres from Jhansi city center and is popular for its idyllic location offering picturesque view of the surroundings. Close to the dam are forts and temples, the origin of which can be traced back to the 8th century AD during the time of Pratiharas.

How to reach: Buses, Tempos mini-vans ply at regular intervals to Barua Sagar from various stops within Jhansi town.

Narayan Bagh, also called Government Garden houses many varieties of plants and trees and creates an ideal place for recreation. The Plant and Vegetable Show is held here in the month of February every year.

Narayan Bagh is located close to Naya Tal, in the cantonment area of Jhansi