The Rani Mahal Palace is located close to the Jhansi Fort that reflects various facets of the life and times of Rani Laskhmi Bai. The Rani Palace was built by Raghunath II who belonged to Newalkar family of Peshwas, the rulers of Jhansi during 1769 to 1796. After the death of her husband, Raja Gangadhar Rao, Rani Lakshmi Bai resided here at Rani Mahal. Historically, this Palace has great significance as it was the center of activity during the Sepoy Mutiny of 1857. All the planning, meeting and negotiations with the British were carried out at Rani Mahal, and repeated efforts of British to reconcile with the Rani failed. When the British finally decided to attack Jhansi, Rani Mahal too came under heavy bombardment which destroyed parts of the palace. 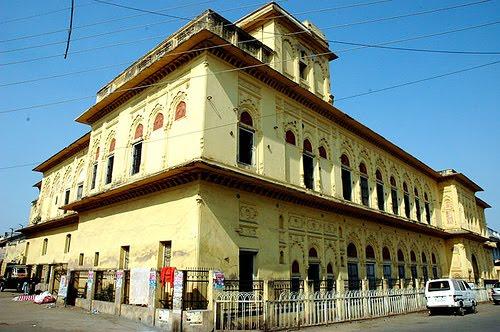 It is a two-storeyed, quadrangular building with an open courtyard that also houses a fountain, a garden and a well. The flat-roofed, colorfully painted walls and doors and corridors running parallel to the palace rooms are a highlight of this palace. The narrow, steep flight of steps leads you to the first floor. The palace consists mainly of six big rooms, the ornately decorated Darbar Hall being one among them and small rooms which served various purposes.

The Durbar Hall which is the main highlight of the Rani Palace is relatively well preserved even today. The flat-roofed Durbar Hall is approached by a flight of stairs and the interiors are very colorfully decorated with exquisite motifs of peacock, floral and geometric designs set within rectangular and square frames on all sides. The vibrant shades of vermillion, and indigo is what makes it stand out despite its age and wear and tear.

Today the Rani Mahal is converted into a museum that houses various paintings, sculptures and objects collected from Datia, Barua Sagar, Chandrapur etc from the times of Gupta and Maurya Dynasty, some dating back to the 9th and 12th Century.