Rani Lakshmi Bai was the heroine of the first war of Indian Independence who even till today is known for her unparalleled nationalism, patriotism, valor and courage. As a queen of Jhansi, she was known for her integrity, leadership and courage, which is well evident from a visit to the historic town of Jhansi. Invariably Jhansi is associated with Rani Lakshmi Bai. She rose to power during the first war of Indian Independence in 1857; her united forces fought against the British occupation in Jhansi. She tried to retain, thus, protect her kingdom from the British rule and left no stone unturned. 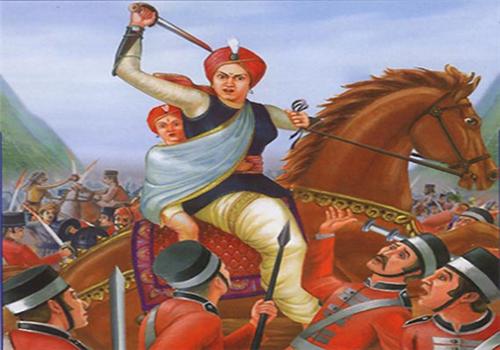 Manikarnika, Rani Lakshmi Bai was known during her childhood; she was born into a Marathi Bramhin family in Varanasi on November 28, 1828. Her parents were Moropant Tambe and Baghirathi Sapre and her father worked in the court of Peshwa of Bithoor District which is situated in Kanpur.

Her mother died when she was barely four-year-old. Hence, she was brought up in the court of the Peshwa, where she learnt skills of archery and warfare, horsemanship, martial arts, etc. When she attained the age of twelve, she was given in marriage to Maharaja Gangadhar Rao, the then ruler of Jhansi kingdom. She was his second wife and the Maharaja was then 40 years of age. Their marriage was solemnized at Ganesh Temple located within the Jhansi Fort premises.

The Rising of Rani Lakshmi Bai

Rani Lakshmi Bai took interest in warfare, administration and welfare of the people in the kingdom. In 1851 Rani gave birth to Damodar Rao. But, unfortunately, the child died when he was only four months old. Overcome by grief, the king fell sick and became weak, which is why they decided to adopt Ananda Rao in 1853.

The very next day after adoption, i.e., on November 21, 1853, Raja Gangadhar Rao died leaving behind the queen and their minor son.

By this time, the British had passed the diabolical law, Doctrine of Lapse. As per the Act, those kingdoms who did not have any lawful heirs to ascend the throne at the time of death of the king automatically fell into the hands of the British. Thus the British applied this law and planned to take over the reigns of Jhansi kingdom by settling the queen and her son for an annual maintenance amount of Rs 60,000.

She made repeated pleas to the British to recognize Damodar Rao as the heir of the kingdom, failing which she consulted a British lawyer who represented her in the Court of Directors in London. However, all her pleas fell into deaf ears. The British even confiscated the state jewels. The British occupation in Jhansi led to killings of cattle on public places, which had hurt the sentiments of Rani Lakshmi Bai. Also, their non-recognition of Damodar Rao further led to her rise to power. It is then that she uttered the words "main apni Jhansi nahin doongi".

Role of Rani Lakshmi Bai in War of Indian Independence

At this juncture, some of the soldiers of the 14th Bengal Cavalry attacked the fort and took refuge on June 8, 1857. They massacred the family of the British officers and incessantly carried out killings and loot in Jhansi for four days. To get the situation under control, the British allowed her to take control of the administration of the state for a brief period.

After this episode, she faced the civil war carried on by the consolidated forces of the neighbouring kings of Datia and Orchha who wanted to divide the kingdom of Jhansi. The troops led by the queen managed to drive away the native rulers. Since they were the allies of British, this episode angered them.

For a brief period, thereafter, from September 1857 to March 1858, Jhansi enjoyed the reign under Rani. She strengthened her army and accumulated a total force of 20,000 soldiers headed by Tatya Tope. Some of her faithful soldiers were Ghulam Gauz, Deewan Raghunath Singh, Dewan Jawahar Singh, Dost Khan, Kuda Baksh, etc. When the British troops led by Hugh Rose took control of the Jhansi Fort, huge killings occurred that led to the death of more than 5,000 soldiers of Jhansi.

The prudent queen thought it fit to retract and withdraw forces from the fort. On the horseback of Badal, with Damodar Rao on her back, Rani fled from the Fort, disguised as a man. She joined the forces of Tatya Tope at Kalpi. The combined forces attacked the ruler of Gwalior and occupied the Fort of Gwalior. On the second day of the fighting, on 18 June, 1858, the queen breathed her last.

Rani Lakshmi Bai is an epitome of courage and integrity. Her name is immortalized in the history of India as one of the greatest personalities who fought against the British. Various monuments, schools and colleges, have been named after her. Her statues erected in Jhansi and also places in the rest of India. They are a solemn memory of Rani Lakshmi Bai whose tales continue to inspire people all over the world.

Explore more about History of Jhansi