Jhansi is popular for its underground jail located at Amod Garden or the queen's garden; it is located within Jhansi Fort. This jail was built during the reign of Marathas in the 18th Century. 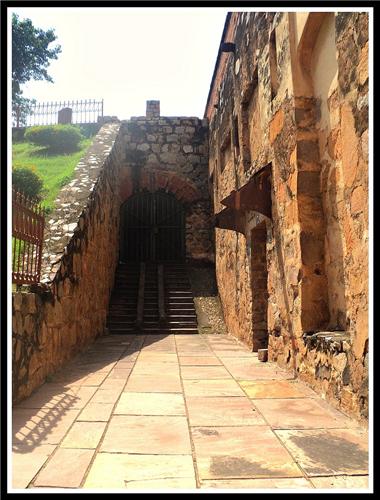 Jhansi District Jail is one of the 53 district jails in Uttar Pradesh. Jail Chouraha or Jail Square is the locality in Civil Lines in the Cantonment area of Jhansi. The jail premises is surrounded by 22 acres of land having a capacity to accommodate 600 inmates. As in August, 2013 there are around 1050 convicts which include 850 men, 150 juvenile convicts and around 50 women convicts. Roughly around 40% of the total inmates are convicted, while the others are under trial. Several NGOs like Pragathi Rath and the ones run by the Jhansi Diocese are working hand in hand with the jail authorities in conducting rehabilitation programs for the inmates here. Vocational training, counseling are some modules of rehabilitation of the prison in Jhansi.

Jail reforms are important in legal structure. Jhansi Prison authorities, under the guidance of Jhansi Diocese, have formed the Ministry of Prisons in 2013. The main aim of this organization is to empower the inmates to create sustainable future and lead an independent livelihood during their term and after they are released from the prison. With this view several training programs like tailoring, carpentry, embroidery, electrical training and such other vocational training is imparted to the prisoners.

This NGO is actively involved in reforms of prison inmates particularly the women inmates. Vocational training such as bangle and costume, jewellery making, etc is taught to the female inmates. Counseling and moral support is emphasized and given at regular intervals.