The historical town of Orchha is located 15 kms from Jhansi in the neighborhood state of Madhya Pradesh. Orchha is marked by many stone structures of palaces, chattris and temples belonging to the medieval times built during the Bundela rule. Orchha bears the testimony of the rich cultural heritage and conjures the image of unique stone architecture. 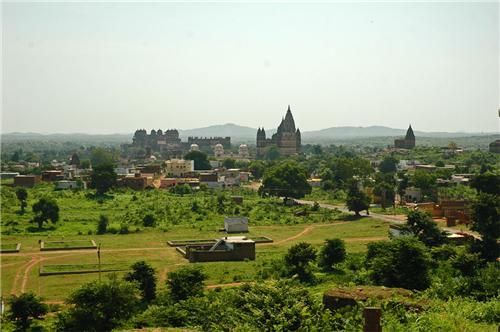 Places to see at Orchha


Here are places of tourist attraction in Orchha.

Rai Praveen was known for her beauty and enchanting voice and graced the court of valiant Raja Indrajit Singh. This three storeyed architecture is known for its stone carvings and paintings.

This five-storey tier palace was built by Raja Bir Singh in remembrance of his close friend King Jehangir is fine synthesis of Mughal and Bundela architecture. The meticulously designed architecture with dome kiosks, Mughal inlay work and ornate entrance in both Islam and Hindu style is a class apart.

The palace of the erstwhile Bundela kings is a standing example of their architecture, which is marked by plain exteriors capped with intricately carved chattris. This gives way to the well interiors decorated with murals, depicting stories of Rama and Krishna as well as the ten avatars of Vishnu.

It is a palace-turned-temple popular among visitors from all round the globe. Visitors throng here during the festivals of Makar Sankranti, Vasant Panchami, Ram Navami, etc.

Perched up on the hill top of Orchha is the famous Mahalakshmi temple which also houses statues of king Madhukar Shah and his queen.

This gigantic palace-turned-temple is known for its grand intricately carved stone exterior capped with chattris. The high vaulted, domed ceiling teamed with a rather simple sanctum is a class apart.

This palace is an ode to Hardol who took to martyrdom to prove his innocence to his elder brother. 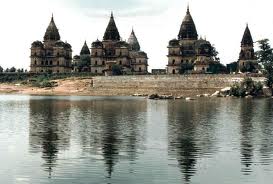 Chattris are cenotaphs which are built in memory of the erstwhile rulers. The Fourteen Chattris in Orchha are located at the banks of River Betwa are a solemn memorial of the kings of Bundelkhand and offer a picturesque view.

How to Reach Orchha

All major bus services are available from Jhansi town. Rickshaws, tempos as well as mini-vans ply on the routes between Jhansi and Orchha.