Lakshmi Tal is the lake located in old Jhansi, that was built during the early 18th Century, and was the main source of water to the city that flourished within the Fort walls.With innumerable tales and stories surrounding around Lakshmi Tal, this lake has occupied a pivotal role in Jhansi. In present day the Lakshmi Tal in Jhansi is popular place to visit, albeit very ill-maintained too. It is surrounded by various monuments, parks and temples built during the historical era. 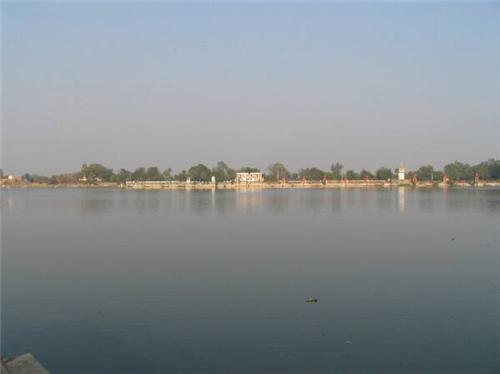 Legend of Rani Sakhubhai of Jhansi


Rani Sakhubhai was the widow of Raja Krishna Rao, who was the son of Raja Shivabhaurao Newalkar. Raja Krishna Rao died very young leaving behind his wife Sakhubai and Ramachandrarao, his minor son. The kingdom naturally fell into the hands of his wife Rani Sakhubhai. She was known to be a cruel queen who wanted all the control over the kingdom, and did not want even her son to be crowned as the king after he grew up. After making several plans to kill him, she hatched a diabolical plan to put an end to his life. She placed spears under the waters of Lakshmi Tal at the same spot where he used to go for swimming. However, he was saved by his loyal servant at the nick of time. Infuriated, the queen got him hacked to death. Ramachandrarao, upon realizing his mother's plans got her imprisoned for life. She killed herself by swallowing diamond pieces in the jail.

Lakshmi Tal in present day is an ill-maintained lake in an unkempt surrounding. The local bodies with the help of government are considering to revive this place of historical importance.