Bundelkhand is known for its rare art and dance forms, unique traditions and rich cultural practices. Ayurved Jhansi Mahotsav is organized by the Uttar Pradesh Government every year during the months of November/December. This week-long festival showcases the inherent talents of artistes from the areas of Bundelkhand, the vivid art and dance forms of the region, exhibitions, competitions for children, etc. Since its inception in 1993 under the patronage of the then commissioner of Jhansi, Shri Dharmendra Dev Mishra, this festival has been held continually at several locations in the city. Some of the cultural programs organized during the Mahotsav are the Sports Meet, Shilpa Mela, folk dance, Kala Parv etc. 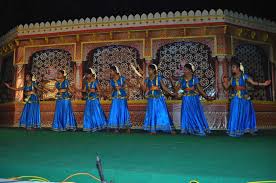 Gandhi Shilp Mela and Exhibition showcases the handicrafts of master craftsmen from the districts of Bundelkhand. Clothes and outfits, handloom fabrics, handicrafts are some of the exhibits here at the Mela.

The Bundeli Manch is where the artistes from all over Bundelkhand showcase their dance/singing talent. The Bundeli dances namely Rai dance, Akhara etc. are performed here at the Manch.

Encouragement to new talent from the city is the main highlight of Kala Parv. Competitions for youngsters such as quiz competition, display of Mehndi, drawing and painting competition are held at the Kala Parv. This is held at the Deendayal Sabhaghar/Auditorium close to the Rani Lakshmi Bai Park.

Several programs are held in the city in the evenings at the open air auditorium wherein dance, drama, theater shows are displayed. Separate stalls are organized by the Bundelkhand Ayurveda College which display the use and benefits, cure and remedies of Ayurveda. Every year there is also a display on the benefits and cure of Ayurveda at separate time slots is presented at the State Archeological Department premises.

Sports meet and sports competitions are held on a specific day with a view to encourage sports among the youth. The week long extravaganza draws huge crowds of people from the city and the nearby districts of Jhansi.


Explore more about Culture of Jhansi