Jhansi Fort or Jhansi ka kila is the landmark of Jhansi town around which the ancient city of Jhansi flourished. As the history goes, Bundelkhand was under the strong hold of the Chandelas from the 11th century. Raja of Orchha Bir Singh Ju Deo built the fort in 1613 in the erstwhile town of Balwantnagar (now called Jhansi); the Fort still bears marks of all the bloodletting that took place within its walls and the moat. Situated on the top of Bagira, it is spread across 15 acres it has stood the test of time for over 400 years. After building this structure of the fort, the Bundela rulers continued to rule for 25 years, after which Jhansi came under the rule of the Mughals. 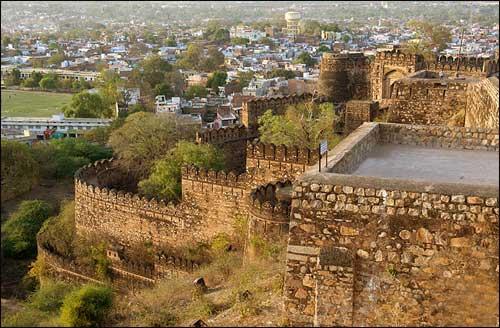 Maharaja Chattrasal of Jhansi appealed to the Marathas for help. Peshwa Baji Rao helped the Bundela Raja defeat the Mughals and reclaim their throne of Jhansi. Later, Naroshankar, the ruler of Jhansi in 1730 extended the Fort wall up to a circumference of 7.3 kms and also added other highlights within the Fort like the Shiva Temple, the walls of the Fort, etc. The extended part is called as Shankergarh. Various points have been added in the years that followed. The sitemap in the entrance of the Fort highlights the major points here, namely:

The old Fort wall had ten gates known as: Datia, Khanderao, Bhander, Jhirna, Sagar, Saniyar, Lakshmi, Baragaon, Orchha and Panch Mahal. Each of these doors are made of wood and the Bhander gate is now closed for visitors. The breach between the walls of Saniyar and Jhirna was made by the British Army during the assault of 1858.


The beautifully built, ornately decorated and intricately carved structure was built by Raja Gangadhar Rao for his brother Raghunath Rao who was a great lover of art and architecture. The central part was made of stucco and the roof of this structure formed a pond from where water sprinkled all over.

The Ganesh Mandir is where Rani Lakshmi Bai married Raja Gangadhar Rao and where the Rani used to worship regularly. The temple is situated in the entrance of the fort and the presiding deity here is Lord Ganesh.

Going by the name “gate to the city”, the Shahar Darwaza was the original gate that led from the fort to the city. After the British took over the fort, this gate has been closed permanently.

The original building consisted of five floors that was built during the time of Raja Bir Singh Deo between 1611-1627. Only three storeys exist today. This is where Rani Lakshmi Bai lived with her husband Raja Gangadhar Rao until his death.

The temple was built by Naroshankar in the mid 18th Century. The main Shivalinga is made of granite stone and the temple is a fine example of both Bundela and Maratha architecture.

This tower was erected during the time of Raja Gangadhar Rao for the execution of offenders that was later used by the British.

When the British surrounded the Fort of Jhansi, the Rani fled with her son on the horseback of Badal from this place.

This lion headed canon measuring 5.5 meters by 1.8 meters was operated by Ghulam Gauz, one of the faithful soldiers of Rani’s army. The canon which is placed in the eastern end of the fort, was believed to roar like a lion, when shot.

The Canon believed to be blessed by the powers of Lord Bhavani, whose name is inscribed on this canon dating back to 1781 AD, has a crocodile front and the back of an elephant.

This is the recreational park that was used by the Rani and her friends. It is situated near the Shiva temple inside the Jhansi Fort.

Gulam Gaus Khan was one of the three trusted soldiers of Rani Lakshmi Bai. He was killed during the war of 1857 when the canon ball burst inside the canon Kadak Bijli that he was operating. His tomb is situated within the Fort.

This is a dark room within the fort premises, where the British jailed the prisoners who they thought would create problem for national security.

This show is held every evening at 6.30 during winters and 7.30 during summers. The show depicts various facets of history of Jhansi and encapsulates the events that took place during the First War of Indian Independence, 1857, and the life and times of Rani Lakshmi Bai.