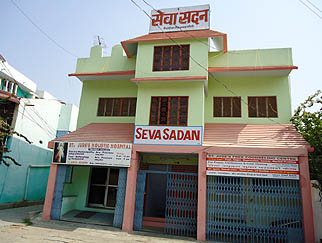 
Seva Samaj is actively involved in providing assistance to the poorer sections of the society. They are involved in giving counseling by educating the families about the title over property, better hygiene, sanitation, etc.Vocational training is given to help them earn a livelihood and become independent. In brevity, the Seva Samaj is involved in the following spheres:
The Seva Samaj involved in disaster management and rehabilitation on occasions of natural disasters such as floods, earthquakes, etc. During the floods of River Kane in 1991 and 2005 the Diocese provided food and shelter to the affected people here.


The Welfare homes aim at providing shelter and basic necessities for the needy. They are given vocational training to support themselves and earn their livelihood. People who have no roof over their head or have nowhere to go, find accommodation under the care of the Diocese.


The Diocese of Jhansi has several homes for the aged and orphanages for children across various locations in the districts here. They are given assistance by providing vocational training and shelter so that they are able to sustain themselves.

Other Services by Jhansi Diocese


Jhansi Diocese is involved in the whole host of other services providing active assistance to the poor and impoverished sections of the society. They are actively involved in the spheres of health, education and social welfare in Jhansi and its surrounding villages. Shelter homes, hostels for boys and girls are run within the Diocese where children not only get shelter but also basic education and training to sustain themselves in future.

Explore more about Society in Jhansi