Jhansi is the historical town in North India located on the banks of Betwa River and River Pushpavathi. It occupies a prominent place in the history of India and is almost at all times, referred with its queen Rani Lakshmi Bai, who was known for her bravery, courage and valor. Her valiant efforts to restore the Kingdom of Jhansi during the First War if Indian Independence of 1857, her clarion cry "Main Apni Jhansi Nahin Doongi", have been immortalized in our minds. 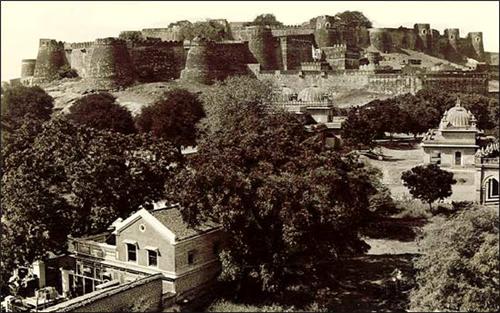 Bundelkhand occupied a significant part of North Central India during olden times. Jhansi was popularly known as Balwant Nagar. It's topography of rocky plateaus, the slope from North to South of Vindhya ranges, formed a natural defense against the attacks by enemies. The Chandelas ruled Jhansi until 11th century, which was then divided into three divisions. Sources from history, throw very little light about Jhansi between 11th and 16th century. Jhansi rose to fame in 16th century under the rule of Raja Bir Singh Deo, who carried various developmental activities including building the Jhansi Fort. Maharaja Chattarsal Bundela was a good administrator. When Muslim governor Mohammad Khan Bhangansh attacked Bundela kingdom in 1729, the Chattarsal king sought aid of the Marathas. Peshwa Baji Rao helped defeat the Mughal army for which he was granted governance of 1/3 kingdom of Bundelkhand that included Jhansi. He and his descendants like Naroshankar developed the city of Jhansi and inhabited it with people from the nearby Orcha kingdom.

The Marathas by entering into a Treaty with the British East India Company in 1817 were given powers over Peshwa kingdom in Pune. This put an end to the Maratha rule in Bundelkhand.

The kingdom of Jhansi in present day Uttar Pradesh was ruled by inefficient rulers who were only the de-jure heads of the kingdom. This paved way to the British interference in the administration. The diabolic, controversial law, Doctrine of Lapse passed by Lord Dalhousie who was the Governor General between 1848 to 1856 purported to annex the kingdoms of those rulers who did not have a legal heir to succeed the throne. Raja Gangadhar Rao, who were ruling Jhansi during this period adopted Damodar Rao, a day before he passed away. Soon, the British, by applying the principles of Doctrine of Lapse, forcibly retired Rani Lakshmi Bai and her minor son for a paltry sum of Rs 60,000 per annum.

Rani Lakshmi Bai was determined not to give up Jhansi. During the Indian rebellion of 1857, members of the Bengal infantry massacred the European officers, wives and children in Jhansi that led to massive blood letting and looting and declared Rani Lakshmi Bai as their leader. Soon, she asserted her claim over the kingdom of Jhansi by overthrowing the rival king. In an independent battle with the neighboring kingdoms of Orchha and Datia who were allies of the British, the Rani defeated them and proclaimed supremacy over Jhansi.

In March 1858 when the British appealed to her to surrender Jhansi, the queen issued a proclamation saying that they will fight for Freedom of Jhansi. Being a symbol of patriotism, she trained men, women and children to fight for the cause of their kingdom. She was able to gather a troop consisting of 20,000 infantry and cavalry. In two weeks of heavy fighting that followed, Jhansi came under tremendous pressure and loss due to heavy shelling.

The British troops led by Sir Hugh Rose carried on massive killings every quarter of the town. Soon, the Rani decided that it would be futile to carry the bombings as it would only lead to further bloodletting and distress. She withdrew her forces from the Fort and fled on the horseback of Badal, disguised as a man and carrying her son Damodar Rao strapped on her back. She joined the leaders Tantia Tope and Rao Sahib at Kalpi and later moved to Gwalior. She died in the battle at Gwalior against the British in June 1858 and thus came to be called as the "Heroine of the Indian Independence".

Jhansi has played a significant role in India's struggle for freedom under the active guidance of Dewan Shatrugan Singh and his wife Rani Rajendra Kumari (later known as Rani Kaushalya Devi). The Dewan was popularly known as "Bundelkhand Gandhi" as he was an ardent follower of Mahatma Gandhi and also spent his life serving the betterment of people and society at large. When he was imprisoned during the days of fight for Independence, he refused the 'A class' treatment in the jail, although he was entitled to it.

When Vinobha Bhave visited Jhansi to propagate 'BhooDhan" movement, the Dewan initiated the first Graam Dhaan by donating the village Mangrauth and also inspired the rich to donate wealth and land for public welfare.He was known for his unconditional service as none of the institutions were named after him.