Jhansi is a major road and railway junction of Uttar Pradesh. Located on a rocky plateau at an altitude of 211 metres above sea level, the inclination of the natural slope from North to South, it is bordered by the Tarai plains of Uttar Pradesh. Jhansi is situated between rivers Pahuj and Betwa between the latitudes 27040 N and longitudes 80010. The land here is best suited for the cultivation of fruits and crops of wheat, oilseeds, pulses and peas. The Government has built Rajghat Canal to enable irrigation to the farms in and around Jhansi. The North-South Corridor that connects Kashmir and Kanyakumari passes through the city. The total forest area in the district of Jhansi is 34,598 hectares. Jhansi is  also the center of brass ware manufacture and is also one of the chief exports of Jhansi too. 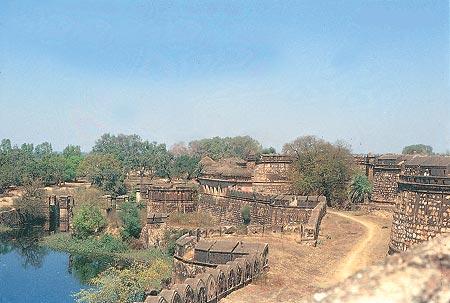 Jhansi is located on the rocky plateau and the weather is generally dry and is prone to extreme weather conditions and temperature fluctuation throughout the year. Winter season stretches from October to January experiencing temperature fall as low as 2 degrees in the month of December. Jhansi experiences a Southwest Monsoon in December. Monsoons are relatively longer of three and a half months during June through September. The average rainfall is 900 mm per year. Peak summers are sweltering hot too with mercury soaring up to 45-47 degrees during the peak months of summer and an average daily temperature of 36 degrees with very high humidity.

Since Jhansi is located on the Rocky plateau the soil is rich in minerals. The major minerals found in this area are concrete stone and granite stone. Topography influences the vegetation and growth of flora and fauna. Since Jhansi is located on a rocky plateau, it is dominated by rocky reliefs and minerals underneath. The terrain is suitable for cultivation and agriculture and this area relies on monsoon and irrigation for cultivation of crops.

Dams and Canals in Jhansi

Canals and dams built during the British rule continues to be a major source of irrigation to over 300,000 hectares.The Matatila Dam built across the Betwa provide drinking water to Jhansi and neighboring villages. Other smaller dams in this area are the Jamni Dam, Rohni Dam, etc. Barua Sagar Dam is built 260 years back which is situated close to Jhansi. Located in the idyllic location, Barua Sagar is known for it's picturesque view and for the greenery around this place. Under an ambitious project, the Government built the Rajghat Canal that enables irrigation to the farms in and around the areas of Jhansi and Bundelkhand.

Facts and figures about Jhansi