The economy of Jhansi is dependent on agriculture and grows oil seeds, citrus fruits, wheat, pulses etc in abundance. Being an agrarian economy also means depending on monsoons which are uncertain and untimely. Also the region here is most prone to famine, to combat which building dams and canals is inevitable and necessary solution. This helps supply of drinking water, irrigation to fields and generation of electricity. 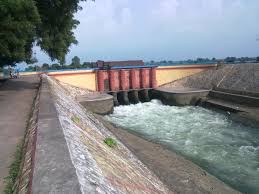 Barua Sagar and Parichha were built during the 17th and 18th century while three dams and weirs were built during the pre-Independence era. Post-Independence, the Government has taken several famine relief measures by constructing dams such as Ken Dam, Matatila dams and canals which are a major source of surface canal water irrigation to the region all round the year. Several projects such as Rajghat Canal are underway and the governments of both Madhya Pradesh and Uttar Pradesh have taken several proactive steps to ensure drinking water and water for irrigation for farmers here in this region. In all, there are around 20 dams, canals and weirs in the regions of Bundelkhand and the highest number of dams are found in the district of Lalitpur.

This dam was built during the 18th Century to enable water supply to the people in Bundelkhand.

This water reservoir is located in Pariccha and is built across River Betwa. The vast expanse of water body stretches up-to 34 kilometers from Parichha, to Nothgate Bridge.

This is a 270-km long canal that was built during the early 1900s across the River Betwa to irrigate to the districts of Jalaun and Jhansi. A dam was built upstream at Dhukhwan to make up for deficiency of water in the reservoir.

This dam was built across Dhasan river and enables irrigation of water to Hamimpur plains. The Pahari Dam, which is also built across the same river is a major source of canal irrigation to the nearby villages.

This dam is built across River Betwa and stretches upto 6.3 kms and enables to generate electricity, provide drinking water as well as provide irrigation to the districts of Lalitpur, Jhansi, Jalaun etc.

Some of the other dams around Jhansi are smaller dams that are located in Lalitpur district. Most of these dams have been constructed across River Shahzad which provide drinking water facility and water irrigation facility to the nearby districts of Jhansi, Lalitpur Jalaun etc.

The Gangnau Dam has been constructed at the point of confluence of Simri and Ken river. There are seven Dams, weirs and Canals built across River Ken.

This dam is built in the nearby district of Shivpuri and almost 13 districts including Jhansi is benefited from this dam.

This is the ambitious multi-state and multipurpose project that was taken by the government, built across river Betwa.The construction of this canal has been stalled due to unresolved indifference between the governments of Uttar Pradesh and Madhya Pradesh.

Explore more about Geography of Jhansi