Jhansi occupies a significant role in Indian history. The monuments found across the city are a witness to the rich cultural heritage and history. Historically, North Central India was a stronghold of Bundelas and the entire region was called Bhundelkhand. Jhansi being its prominent territory was ruled by kings from the Bundela clan, Maratha Peshwas, Mughals, each of whom have influenced the culture heritage in various art and art forms, folk dances that one can witness at various quarters in the district of Jhansi. However, it is obvious that due to the geographic proximity and cultural similarities Jhansi identifies itself with the Bundeli customs, traditions and cultural norms. For all these reasons, Jhansi is known as the "Gateway to Bundelkhand". 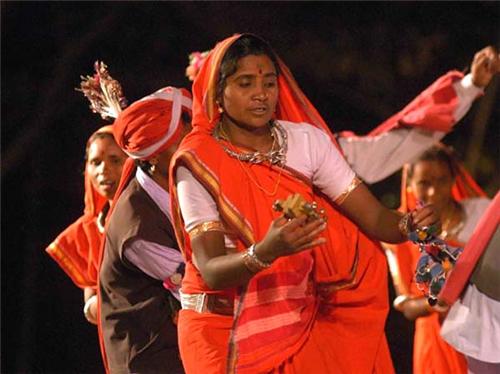 Influence of Bundeli Culture on Jhansi


Present day Bundelkhand is spread across the two states of Uttar Pradesh including Jhansi and the areas in Madhya Pradesh. Their cultural practices are vivid and distinct, their art forms are vibrant and their folk dances are a reflection of the simplicity, vibrancy and vigor of village life. It is a source of living for many artistes living in the villages near Jhansi.


Badhai dance: This dance form is practiced on any happy occasion be it marriage or childbirth or other gatherings of gaiety.

Rai Dance: It is unique among all dance forms where the inspiration is of a humble mustard seed twirling in a saucer. The dancers synchronize their movements according to the drum beats. Both complement and compete with each other with the beats and movements.

Akhara Dance: It is the dance form in combination with martial arts. Here the dancers perform with bamboo sticks and while moving to the beats of the dholak and manjeera.

Jawara Dance: It is a vibrant dance form which is performed to celebrate good harvest. Women dressed in colorful clothes balance basket of jawar on their head while dancing to the steps of music.

Norta Dance: It is performed by young girls during the time of Navaratri that signifies the victory of good over the willful demon.

Diwari Dance: It is performed in devotion to Lord Krishna where the boys dressed as cowherd boys
perform the dance about a fortnight before Diwali.

Festivals and Events in Jhansi

Initiated in 1993 Jhansi Mahotsav is celebrated on a grand scale during Febrauary and March. Various cultural and literary activities are showcased in the Mahotsav. It is organised in a stadium at Jhansi and other cultural workshops and performances are held at Rani Lakshmi Bai Park. The Shilp Mela conducted here is an exhibition that showcases the craft and art forms by master craftsmen from the region of Bundelkhand. Bundeli dance forms are performed by renowned artistes and promoted on a special stage called Bundeli Manch. Special exhibitions competitions and workshops are held for children at Deendayal Auditorium. To sum up, Jhansi Mahotsav is held in great grandeur, pomp and show bringing in the best of cultural exhibits of Jhansi and Bundelkhand region.

Flower and Vegetable Exhibition at Narayan Bagh is held in the month of February every year at Narayan Bagh, where the farmers display their produce and some crafts of this region too.

Places of Cultural Importance in Jhansi

Jhansi is dotted with museums, monuments and galleries where one can witness the Bundeli art forms and its cultural heritage. The places and spots that require a special mention here are:

Gangadhar Rao Ki Chatri: This is a cenotaph in memory of Maharaja Gangadhar Rao whose reign marks the beginning of art and culture in Jhansi. Though not known for his skills in administration, the Raja was a cultured man who was able to enrich the architecture of the city and acquire a fine library of Sanskrit manuscripts. Gangadhar Rao ki Chatri built in his memory is piece of fine architecture with very fine and intricate carvings all over this monument.

Jhansi Art Gallery: Aims at showcasing the rich culture of Jhansi and Bundelkhand traditions. Some of the paintings displayed here are that of Bundeli art forms and of various monuments and historical places in Jhansi.

Indian classical dance forms such as Kuchipudi, Kathak, Bharatnatyam are popular here and many dance classes impart training for classical styles of dance. While retaining the traditional art forms, contemporary dance styles are popular among the present generation as well. Western dance forms, salsa, Bollywood dance, etc. are popular among the youth of Jhansi as well. A number of dance classes teach different styles of dance including Indian classical dances, western dance and Bollywood dances. This is the comprehensive guide to dance classes held in the city of Jhansi.