Barua Sagar, built on Barua Sagar Tal, is located 24 kms from Jhansi town in the small non-descript town of Barua Sagar. The Dam was built by Raja Udit Singh of Orchha during the early 18th Century. The lake is situated on a height and is set among the verdant surrounding which offers a picturesque view. The embankment is built on steps which is unique to this place that was built during the Bundela rule. Close to the dam is an old Bundelkhand Fort. Though currently under ruins, the fort offers an excellent view of the lake and its surroundings. 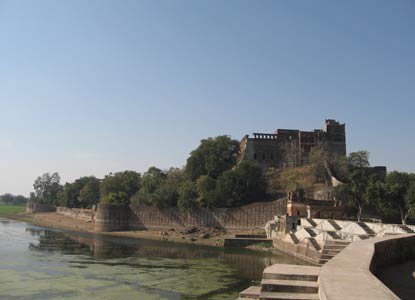 
Many monuments, temples and forts adorn Barua Sagar which reminisces the ancient and the historical past. Some of the monuments like Jerai Math, Kalinjar Fort were built during the time of the Pratiharas who ruled this region between 8th to 11th century.


This temple at Barua Sagar is the second largest among all the Shringarishi temples located in India that was established in 1979. People from all over India, throng to this temple on the occasion of Guru Purnima.


This temple, built by the Bundela rulers, is made of granite stone. It has four cells each with a doorway, three of which have image of Lord Ganesh and one of Goddess Durga.


Jarai Math is probably one of the most popular temples in Barua Sagar that was built during the times of Pratiharas in 860 AD. Parts of the temple have been severely damaged and some have been rebuilt during the Bundela rule in 17th Century. The intricate carvings on the exterior, the fine engravings of multifarious forms of Goddess Durga are the main highlight of this temple architecture. This temple has been listed by the Archaeological Survey of India as a finest example of Pratihara architecture.


The Shiva temple is located close to Barua Sagar where one can find intricate engravings of various forms of Lord Shiva. This temple was built by the Chandela ruler named Parmadi Dev.


This Fort is located atop the hill in Barua Sagar. It offers a magnificent view of the picturesque landscape all around.


This fort is an example of hill fortress that overlooks the Lake Baruasagar and was built during the times of Pratiharas in 10th Century. The splendour of the Fort had resulted in series of attacks from time to time including that of Mahamud Ghazni, British etc.

Barua Sagar Tal was the war site during the battle that took place between the Bundelas and Peshwas in the early 18th Century in 1744. Later in the 19th Century, after the death of Raja Gangadhar Rao, Jhansi was under political turmoil and instability. Nathe Khans, the Prime Minister of Orchha conspired and took over the Jhansi Fort and Barua Sagar. He could not, however, carry on further attacks as the Rani with a powerful troop attacked and reclaimed these areas. During the days of Indian Independence, the political workers of this area had a secret office here from where they used to send secret letters to people around Bundelkhand area.

How to Reach Barua Sagar