The historic district of Jhansi is situated in the Bundelkhand region of Uttar Pradesh and located on the banks of River Pushpavathi. The history of Jhansi dates back to the 11th century, when the Chandela rulers had a strong hold over the kingdom of Jhansi. Jhansi Fort the main landmark of the city has profound historical significance as it proved to be a natural barricade against the possible attacks by the enemies. The valiant efforts of Rani Lakshmi Bai in protecting and restoring the kingdom of Jhansi during the First War of Independence of 1857 are revered and remembered by the people here even till this day. While the city offers various historical points of interest, the present town has a well developed infrastructure connecting to all major cities of India. Jhansi is a great seat of learning too with educational institutions mushrooming up everywhere in the city. 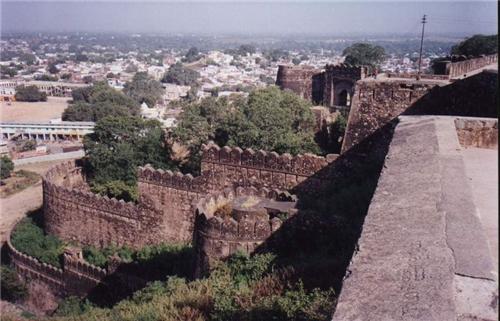 The historic town of Jhansi flourished around the walled Jhansi Fort when the Bundelas had a stronghold on Jhansi from 11th century. Till the 17th century it continued to be under the rule of various rulers including the Peshwas. The kingdom rose to prominence during the British era when the Maharaja of Jhansi died in 1853, without leaving behind any male heir to succeed the throne. The British forcibly retired the Raja's widow Lakshmi Bai by applying the rules of Doctrine of Lapse. The Rani led her army in the forefront during the First War of Independence of 1857 and destroyed the British Army by reinstating the kingdom of Jhansi, she became the heroine of the First war of Independence. Jhansi came under the British rule in 1858 after the queen fled to Gwalior, where she was later killed.

Jhansi is located 297 kms from Lucknow, and is 414 kms from Delhi. The River Pushpavati flows through Jhansi making the region conducive for growing citrus fruits and wheat, pulses, oilseed, etc. Due to it's strategic location and easy access to many cities, it is a popular destination for visitors en route Khajuraho, Gwalior and Orchha.

Due to it's location, Jhansi is prone to extremities in climatic conditions.During peak winters, the temperature can be as low as 4 degrees, while during summer season, the mercury soars up to 47 degrees.

Places of Tourist Interest in Jhansi

Jhansi is dotted all along with places of historical importance. The main landmark of Jhansi is the Jhansi Fort, which even today bears sign of the tormented past. Occupying the center stage is the statue of Rani fleeing away with her adopted son on the horseback. The fort, extends up to 15 kms, also houses two temples namely Ganesh Temple and Shiva Temple within the garrisoned walls. The view of the Fort during night is quite a spectacle.

Other places of interest in Jhansi are:


Festivals and Events in Jhansi

Jhansi Mahotsav is held every year during Febrauary and March. It showcases the rich culture and tradition of Bundelkhand. It is held in the open air auditorium close to the Archaeological museum and the nearby parks.

Jhansi offers a wide range of shopping avenues for clothes, footwear and handicrafts. Some of the popular picks among the tourists to Jhansi are the brassware, rugs, and silk which even caters to the export market too. The main shopping areas of Jhansi are the Sadar Bazaar, Manik Chowk, Sipri Bazaar and Civil Lines.

Click Here to Read More on Shopping in Jhansi

Jhansi is dotted with many eateries and restaurants serving veg and non-veg food to suit every pocket.
From choices of sweets to spicy namkeens, thali joints to chaat corners they are found in every quarter of the town. Some of the popular eateries in town are Shrinath Pav Bhaji and Pulao Centre, Dehliwala Chat store, Narayan Chaat Bhandaar and Geeta Bhojanalay. Some of the fine dining options in the city include Jhansi Hotel, Hotel Shrinath Palace and Hotel Chanda.

How to Reach Jhansi

As Jhansi is centrally located it serves as Junction point to four Broad Gauge routes. They have great connectivity to all the major towns of Lucknow, Gwalior, Delhi, etc. All major trains like Shatabdi Express, Duronto Express, Kushinagar Express, etc are linked via Jhansi. The nearest airport is Gwalior, 95kms away, and Khujraho, 175kms from Jhansi. Since it is a junction point to five National Highways, the road connectivity to other towns is phenomenal.